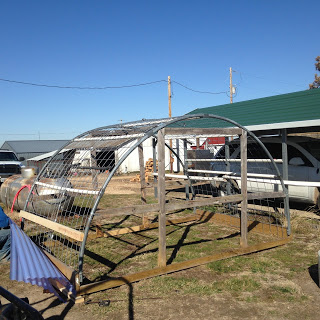 The weather the last few weeks has been remarkably warm and spring-like.  While the weather is much enjoyed, it comes with some anxious anticipation.  The earlier Mother Natures brings on Spring-like weather the more worried I become that there will be that late frost that will snap, getting the peach and cherry blossoms among other blooming plants.

Spring Fever is also harder to deal with as the Spring temperatures climb and the temptation to plant the garden gets strong, even though the mind knows that it is too early.  So until the weather is truly stable and warm enough to plant, we have been working on some projects and taking care of the babies that have arrived or been added.  We have never been known to quickly complete a project….and the greenhouse we started a year ago, had been placed out of the way as the summer got busier last year.  We decided now was the time to get it closer to reality.

I am hoping to get the door on in time to start some plants for the garden, but if not, at least we are getting closer to being able to grow greens for salad all year long, by getting the green house closer to finished.  We opted to go for a corrugated PVC covering rather than plastic, for durability and longevity.

We moved the frame to the location selected.  It is not far from the back door, close to a water hydrant and in full sun the bulk of the day.

We began by attempting to attach the PVC sheeting horizontally.  We quickly realized that this plan would not work well, as there would not be enough tension to prevent them from being loose.  This would allow the wind to create movement that would eventually cause damage. 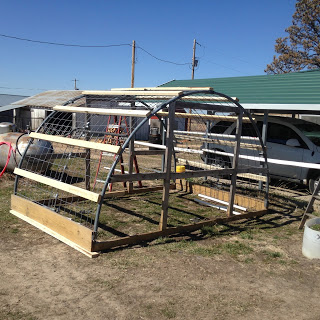 We removed the PVC pipes and drilled and screwed two by fours to the frames, evenly spaced to allow for adequate securing the corrugated PVC to the frame.  The corrugated sheets were then attached to the 2 x 4’s with washered tin screws.  Papa and JD surprised me when I was at work one day and put the sheeting on, so I don’t have pictures of that process. 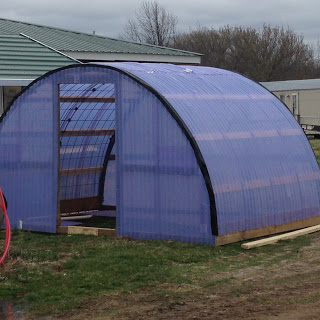 Here is a nearly finished front.  We need to build and attach the door.  We also need to cut a window in the back that can be opened out for ventilation and to control the temperature in the summer time.  In addition to that, we will be making the raised beds and a table for starting seeds.  Hopefully this will be completed in the next couple of weeks.  We may not have time to get our own cool weather plants started, but we may still have time to start tomatoes, cucumbers, peppers, etc.  We are looking forward to putting this project to good use.  We have invested a bit more than we initially expected, but it should give us years of productivity, and spread over the last two years, the $400 we have invested has not hurt the budget too badly.

The learning process we will have will be enjoyable and at times frustrating.  I have recently learned that for each layer, we can gain a zone.  With that said, being in zone 6 (b), by having the greenhouse, we jump to zone 7.  If we add a hoop and plastic over the raised bed, it will increase to zone 8.  This idea becomes intriguing and I will be experimenting with a layer or two of plastic inside the greenhouse as we get further experience.  Until then, I am excited to be able to do more of our growing and seed starting without being dependent on purchasing them from franchise stores or local commercial greenhouses.