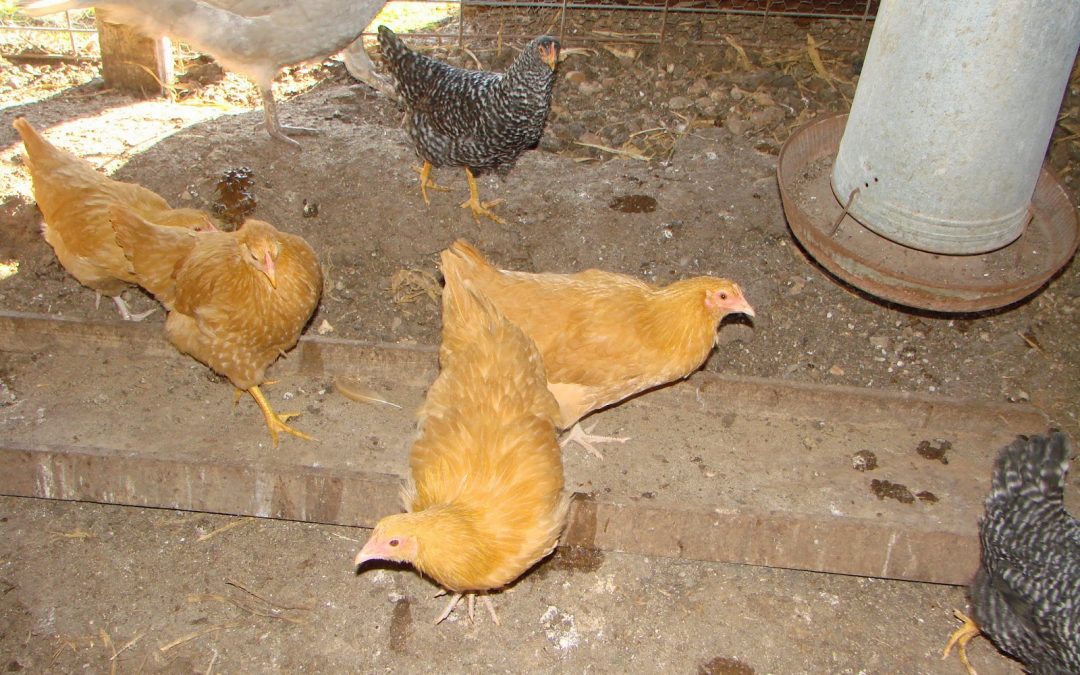 We’ve had a very unpleasant reminder that having animals, raising your own food and being self-sufficient is sometimes not easy. This choice comes with an extensive set of responsibilities that if neglected can cost more than the few dollars we might have paid for those animals.  This post is not for the faint of heart, and if blood or dead animals bothers you, then please skip right on. 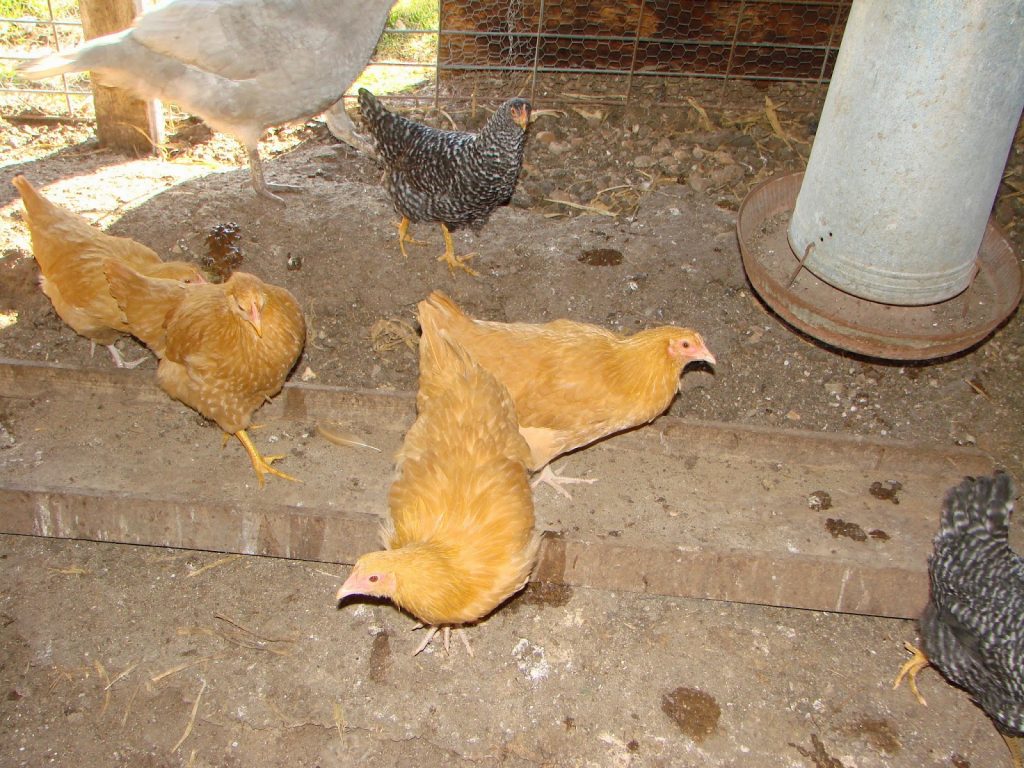 Last week on two consecutive mornings, we found a dead pullet in the pen.  It seemed secure, and we were puzzled in addition to being very disappointed. The 6 Barred Rock and 6 Buff Orphington pullets we bought last fall had done so well. They were beautiful, all females as promised, and we had raised them from chicks that were just days old without a hitch.  We were looking forward to adding these to our laying flock in the Spring.  After ruling out predators, because we didn’t see any evidence of anything digging under or tearing through to get in, we decided that maybe the turkeys had gotten aggressive, so we decided to move them in with the established layers a little early. 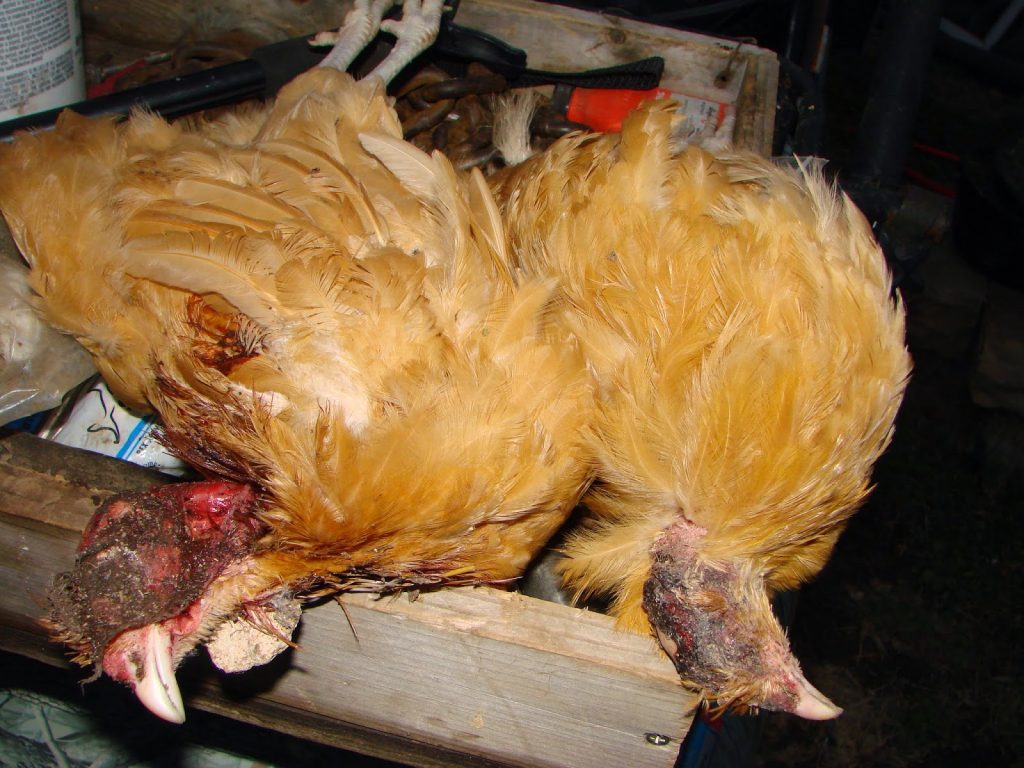 While I was on a 48 hour shift on the ambulance, Larry found two of the Buffs dead in the pen on day three of integration. I had been concerned about them getting along, but when the first 24 hours went by without any major aggression, I thought we were good.  I learned a valuable lesson. The established layers were not ready to welcome the pullets and our help would be needed for a smooth integration.  From now on I will be using an integration plan to introduce new birds into the flock.  I do not want this to be a sight I see on a regular basis.

I’ve read about an integration called the “play pen process”.  The new additions are introduced into the flock in the safety of their own cage.  I don’t currently have a cage, but am using a small animal cage that was used for rabbits to keep the new girls safe from the grouchy layers, until they can get used to one another.  When I have some time, I will build a small cage just for this purpose. 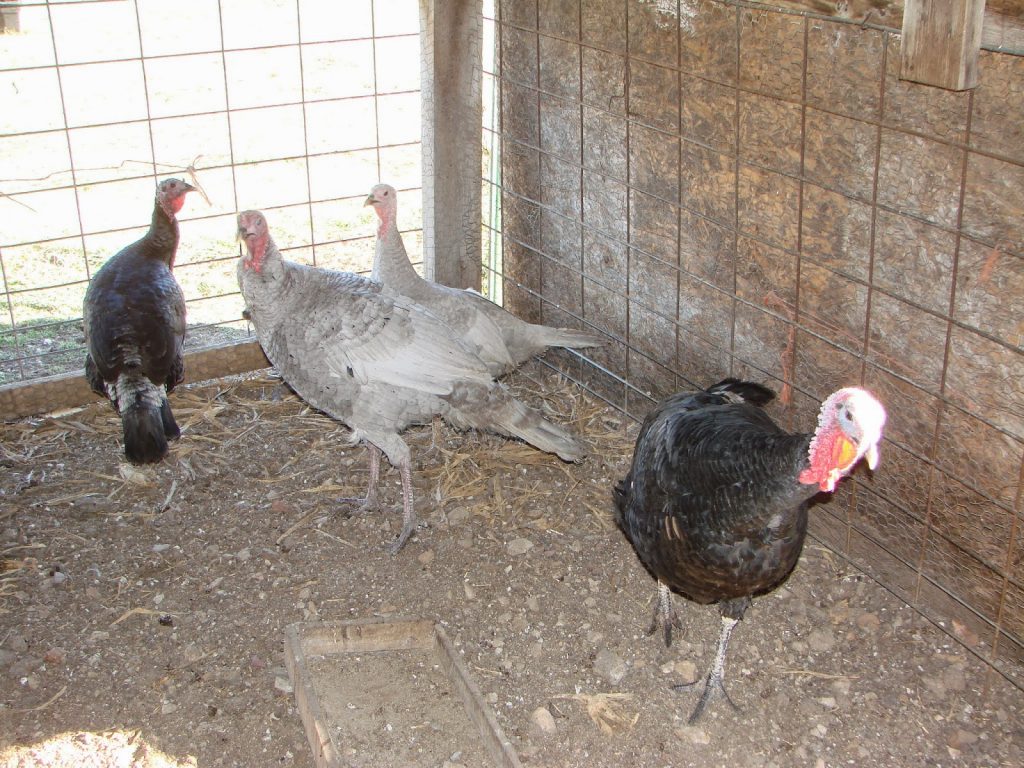 At the same time these two pullets were suffering an early death, our Blue Slate Tom disappeared from his pen. It was assumed, with his disappearance, that we did have a predator and that, whatever IT was, had gotten him during the night.  When I got home, I started checking carefully. Larry said there was a place up high that was torn up and that he suspected that maybe a bobcat might be our culprit.  Upon inspection, it appeared that the damage had come from the inside the pen.  I became hopeful that whatever had disturbed the turkeys had simply scared him and he had escaped out the top of the pen. I had high hopes that he would be found wondering the woods the next day with his craw full of acorns.  It was too late to look for him because darkness had already fallen, but I would get up early and begin the search.  I prepared for the possibility of a predator as well. I had a loaded gun on the kitchen counter with a flashlight and slept in a spare bedroom on the back side of the house with the window open so that I might hear any disturbance that might occur during the night. 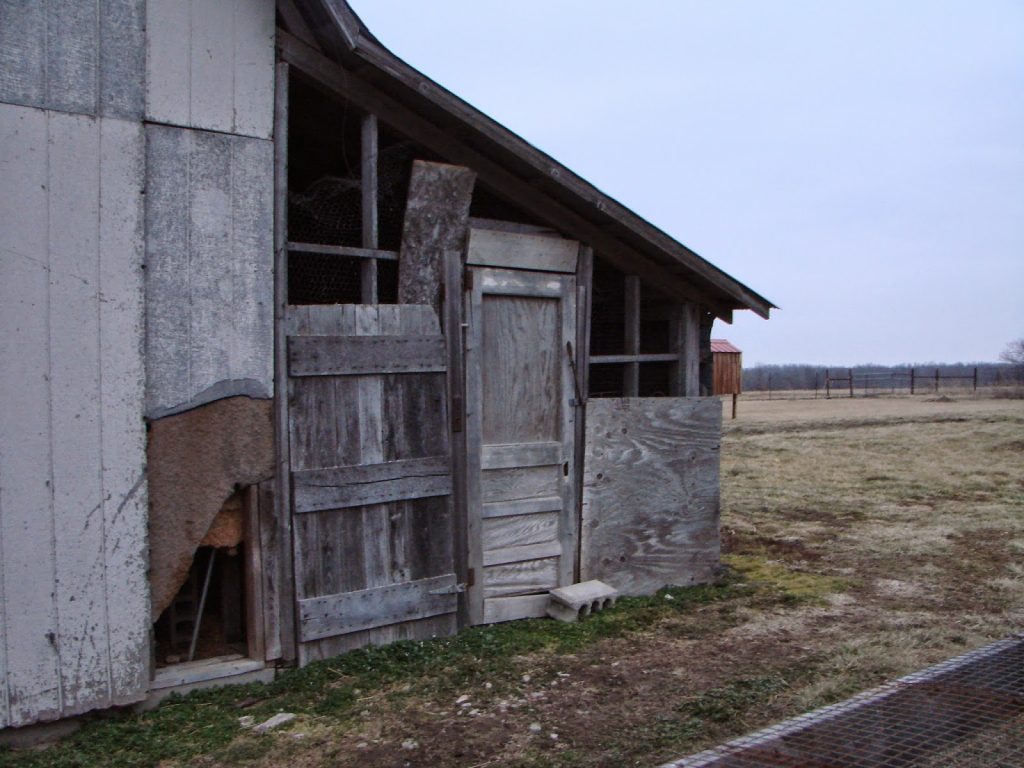 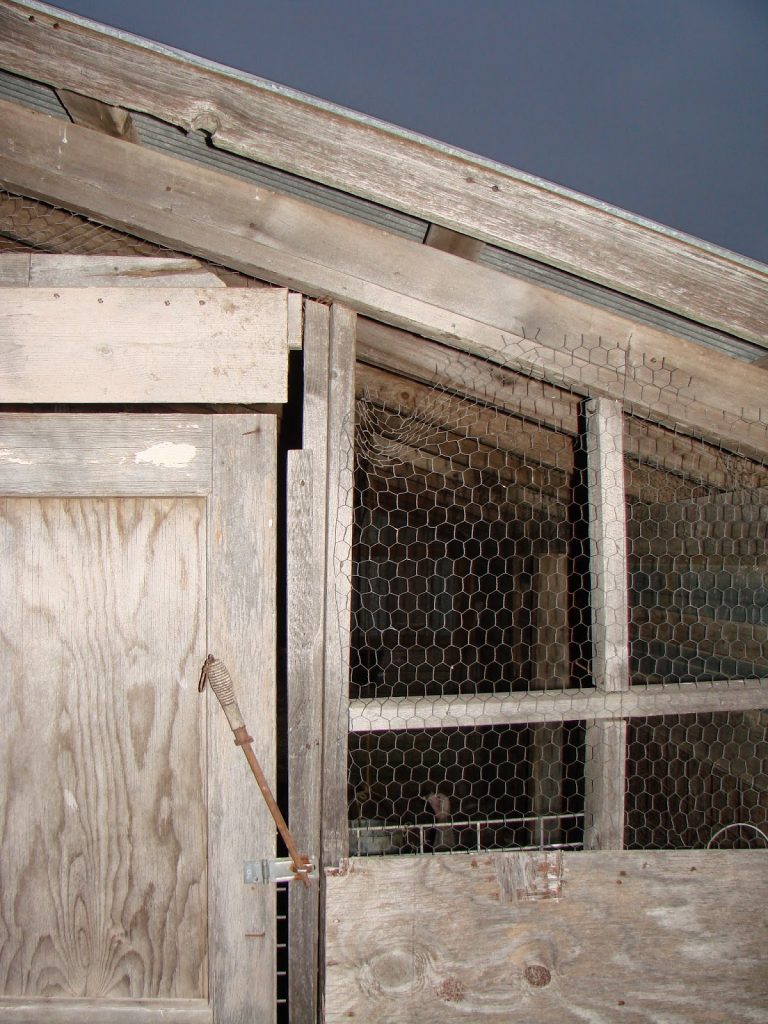 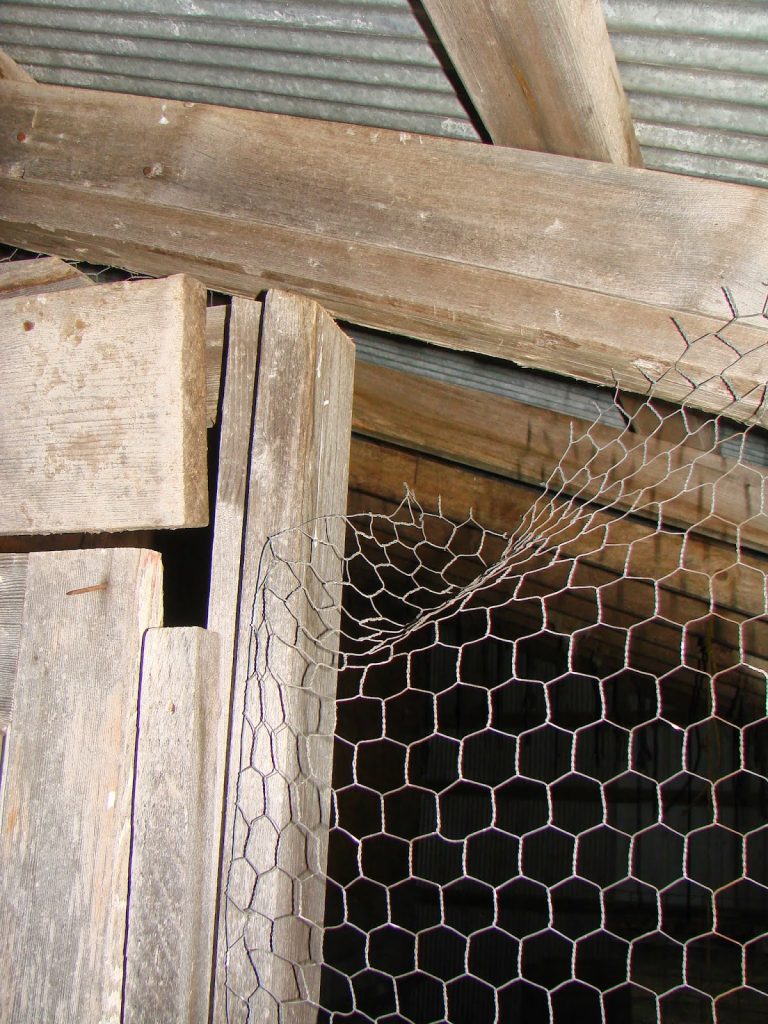 I did a careful inspection early the next morning. The building is not in the best of shape, but at first glance it appears to be critter-tight.  Upon further inspection a small area pushed inward to the right of the of the old door about head high is seen. It would be large enough for a raccoon or opossum to climb up to and crawl through. 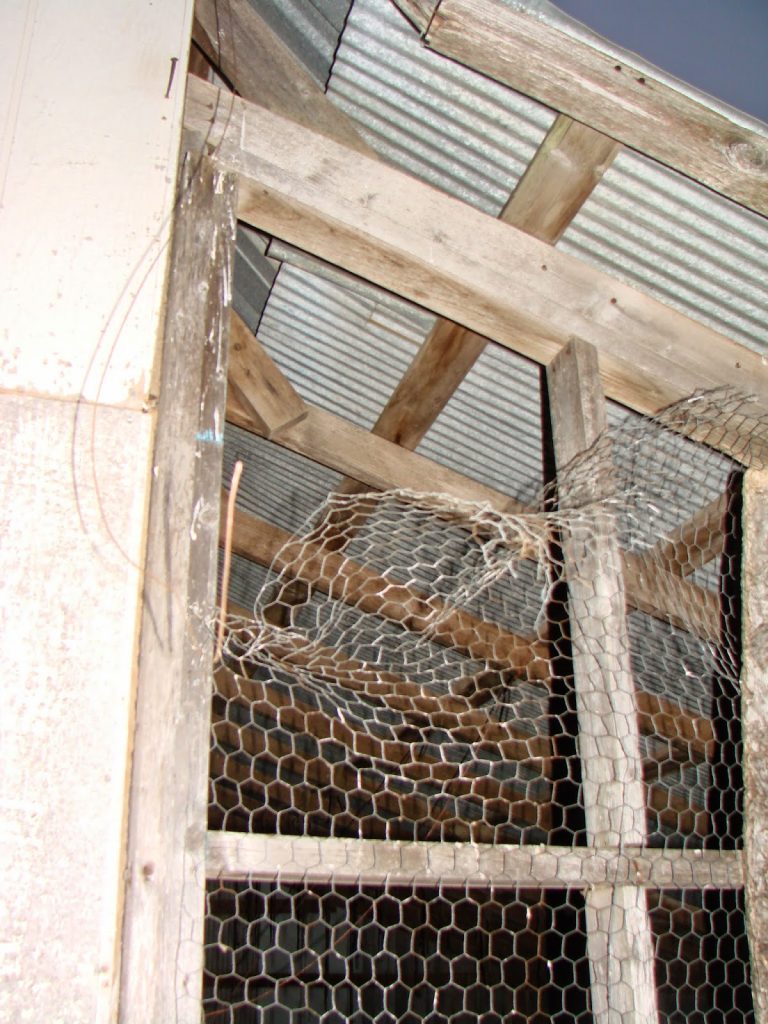 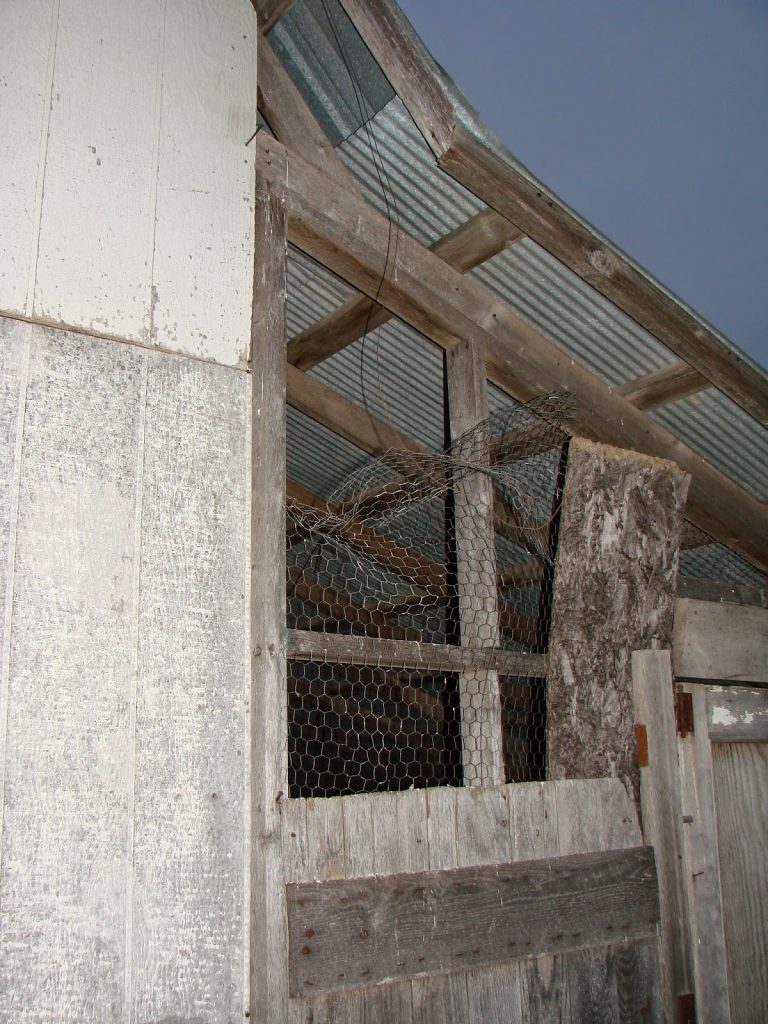 To the left of the old door, at the very top of the pen area a large area of wire was found pushed outward. This is where I think the Tom might have escaped.  The reason for his escape is still a mystery at this time. It could have been fear of a predator or an altercation with the larger, more dominant Black Spanish Tom. At this point, both areas have been repaired and a baited live trap has been placed near the door. Hopefully, catching a predator will answer some of the questions we still have.

When I went on a search for further clues as to the whereabouts of the Blue Slate Tom, I didn’t get far from the house before I found a feather in the road that was obviously his. I knew I had headed in the right direction and was hopeful that I would find him scratching through the leaves looking for acorns and bugs.  But soon, after walking into a lightly wooded area, I found a pile of feathers. 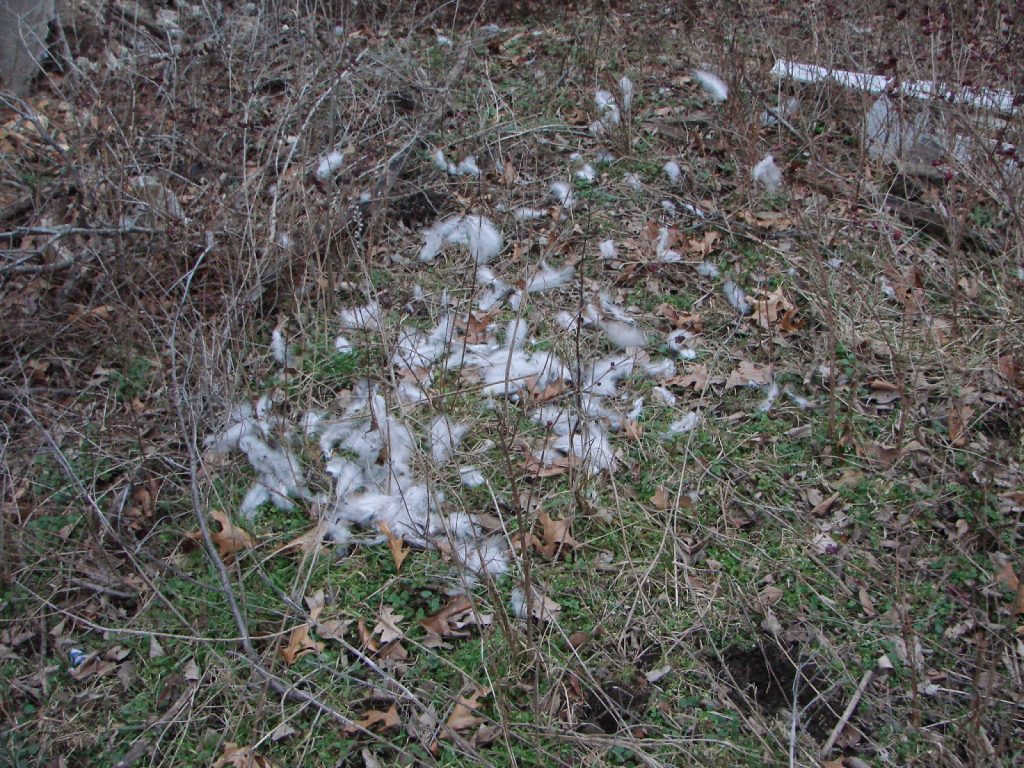 In these feathers, there was no blood and no signs of a carcass, but I still began to lose some of the hope of finding the Tom alive that I had had the night before. I began searching for tracks or scat or anything else that might indicate what type of predator had obviously attacked the Tom in this area. I didn’t find any sign to answer that question, but it was just a few minutes before I found the carcass of our Tom. Disappointment is an understatement when I describe what my feelings were when I discovered the carcass. 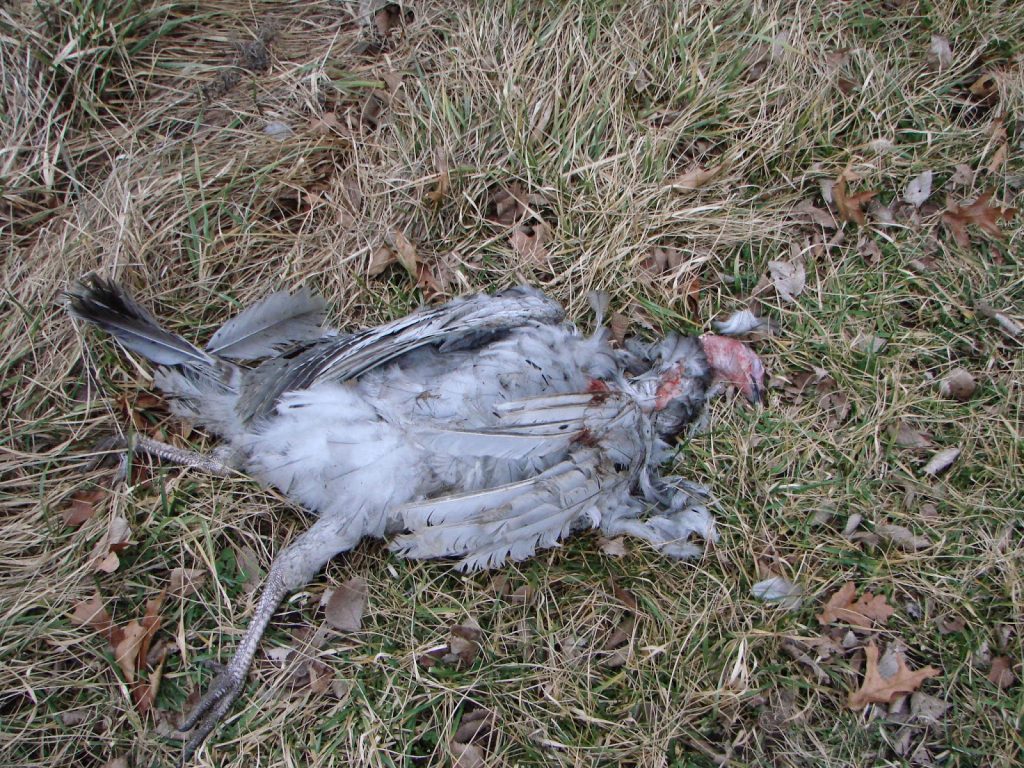 For me, the saddest part of the past few days, is also the most educational.  When we make the choice to be Modern Pioneers and have animals in our care, we must remember that we are responsible not only for their care, but also for their safety.  It is the natural way of things for predators to kill prey; for survival of the fittest; that living things will at some point die. However, what is not natural is the penning of these animals, domestication in itself has made many of these animals have their primal fight or flight responses bred out of them or at least sent these instincts to the far depths of their natural behaviors. When we participate in that domestication, we have an obligation to make sure that everything possible is done to keep these animals safe, not only from predators, but from some the remaining primal instincts that might make them turn on one another.

We have the obligation to research and learn all we can about the animals we plan to house and raise; learn all we can about their instincts and behaviors so that we may provide an environment that will allow them to, not only survive, but to also thrive.  Our care of them will then lead to their care of us as they provide meat, eggs, milk, furs, and other life sustaining materials.  Let’s never began any type of animal husbandry without a willingness to learn the best way to take care of them, which in turn takes care of ourselves.

Join us at SW Missouri Homesteaders Buy, Barter, Sell or Trade to ask questions and learn about the many aspects of being a Modern Pioneer.