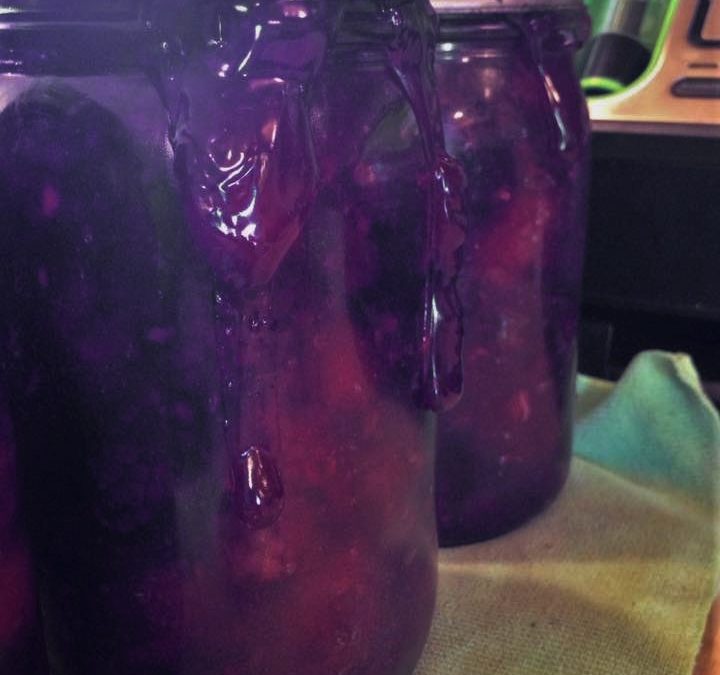 I recently set about canning the first batch of blackberry pie filling of the season.  I have done pie fillings for a couple of years now, and love having a batch ready to go for a quick pie, to use as topping for cheesecake, to add to cake mix for a dump cake, or even to mix into ice cream for a wonderful summer time treat.  The process is not difficult, but it does have a few rules to follow.  The rules are there for a reason, and even with experience, it sometimes happens that we try to bend those rules…or at least I do.  This was one of those times, and I was left with a strong reminder that the rules are there for a reason.  While this post is not about the process of home canning pie filling, it IS a firm reminder that when canning, the head space left at the top of the jars is there for many reasons, and trying to ignore the rules for head space will cause you extra work, and a big mess, at best. 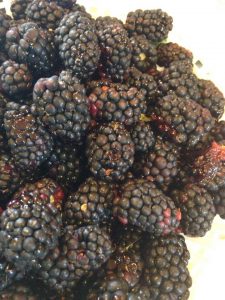 After picking a large bucket of blackberries from the back yard, I mixed the initial ingredients and folded in the berries.  After filling the jars to the appropriate level, I didn’t have enough for another full jar.  I also had a canner full, so rather than take the time to run the canner another round for one pint jar, I opted to add just a bit to each jar….just a little….you know, just a smidge….it won’t matter….All those thoughts rationalized the action that I knew was not the best choice, but seemed like it would be ok.  After all, I was busy; it was hot; and would it really matter?

Still confident that I could trick the rules, and get by this once, I wiped the rims and placed the lids on the jars.  I tightened the rings, placed the jars and in the water and proceeded to clean up while the water began to boil around the beautiful jars of pie filling.  Since it takes some time to process the quart jars, let’s diverge off to the actual REASON you should leave proper head space, and what those appropriate spaces are.  The actual definition of “head space” is the unfilled space in the jar between the level of the food product and the bottom of the metal lid (or the top rim of the jar where the lid sits.)  Recommended head space is usually found in the recipe/instructions which you are using to can.  If there is not a recommendation, the following is a good rule of thumb to follow: 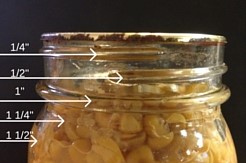 Until you have enough experience to judge the head space there are several inexpensive tools that can be used, or you can use a ruler to measure, to assure you are leaving the correct space.

I would be remiss if I did not explain the reasons for having the correct headspace.  Let me first explain the purpose of the head space.  This area is critical to allow for expansion of food and liquid during the canning/cooking process.  The heated air in this space is necessary for creating the vacuum and seal as the cooling process happens.  Without the head space, items boil over, trapping particles between the lid and the rim of the jar, preventing a seal.  Too much head space prevents the strong vacuum needed for long term storage, allowing bacteria to grow within the jar.  Either can be dangerous, so it is very important to have the correct space. 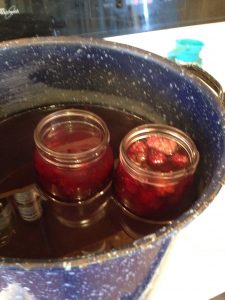 When I opened the lid on my canner, I was greeted with floating blackberries.  Initially, I assumed a jar had broken, which happens occasionally.  I quickly realized, however, that the lids had actually blown off the jars, 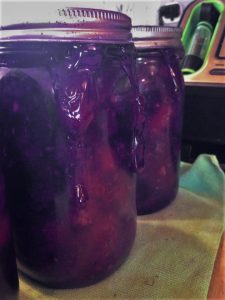 because of the lack of head space.  As the heat, and therefore pressure, built up, there was no too little extra space and the lids came off.  This allowed the dirty canner water to run into two quarts of my precious pie filling.  Instead of saving a pint….I lost two quarts.  I also soon found the other 5 quarts running over in volumes as they attempted to create a vacuum…..so I had to clean them well, remove filling to the proper headspace and reprocess, so instead of saving the time of running the canner an extra round for a single jar, I had to clean and reprocess which actually too me twice as long as it would have to just do the extra jar.

No matter how much experience you have, you should always keep proper processes foremost in your mind.  Avoid trying to cut corners, it only costs you in the long run.  I was lucky it only cost me time and a couple of jars of delicious food.  Ignoring the head space rules, could actually cost you your health.  So, make sure you keep YOUR head on what you are doing by keeping proper headspace in the jars.

While I am not proud of the mistake I made, I have promised to share not only our successes, but also our failures.  So, here we have the first, and hopefully the last, 2016 canning failure.  😉