Hung Out To Dry… 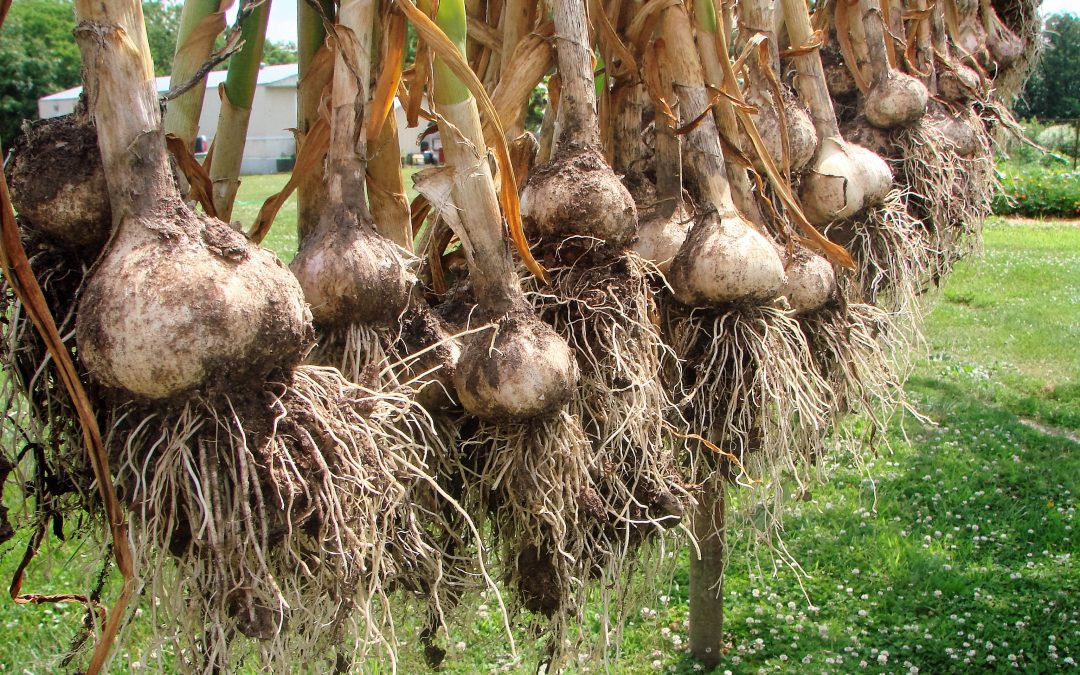 We have grown many of the things we eat over the years, and have attempted to grow garlic in the past, but was never very successful.  With the help of Shannon, from Elderberry Edge Farm, we have a great crop this year!  I was a little surprised at the time it needed to be harvested.  I always thought garlic was a fall harvest, but have learned that we need to watch the plants themselves and they will tell us when they need to be harvested.  But, I am getting ahead of myself.  Let’s start at the beginning….with planting.

I got some Music garlic from Elderberry Edge Farm last fall and planted it in late October.  Garlic stays in the ground all winter for harvest the next growing season.  The goal was to get the roots established, but not have large tops before the first hard freeze.  I took each bulb and divided it into cloves, placed the cloves and inch or so into the soil and awaited.  I believe each clove sprouted quickly and grew quickly.  We had good roots….and green tops well before winter hit.  I was afraid that we would have issues, with tops so large, but they wintered well, and shot up this Spring when the weather warmed.  I worked to keep the weeds out, and other than that I basically IGNORED the stuff. 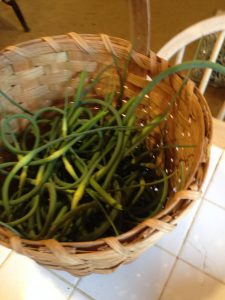 At one point during the growth process, the hard-necked varieties, such a the Music, begin to put up a flower stalk that curls from the center, commonly called scapes.  Usually this happens in mid June, but it happened a little earlier this year.  The scapes shot up and curled late May into the first week of June.  By clipping the scapes, it avoids draining the nutrients from the bulbs encouraging bigger bulbs at harvest.  So we snapped them off, tossing them into a basket…just in case we found a use for them.

I don’t like to waste anything, so I decided to dry these in the dehydrator.  I picked/clipped a large basket full, then cut them into smaller pieces to fit into the dehydrator and be able to stack the trays. 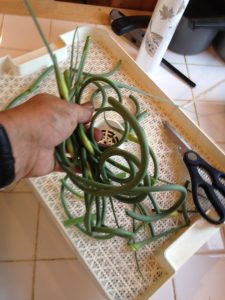 After drying for approximately 36 hours…yes, unlike onions, the scapes are a solid stem rather than hollow and hold a good deal of moisture.  I planned to pulverize them, so I wanted them to be very dry to have the least chance of spoilage later.  When they were dry, I ran them through my Vita-Mix, grinding the into a fine powder.  The taste is amazing.  Not quite as strong as garlic cloves, and very pleasant.  This will quickly become a seasoning I use in many of my spice mixes, for a unique flavor addition.  This can be used the same as garlic powder, but with the more mild flavor than garlic cloves, you will need to use more to get the same “kick”.  This is actually something I really like about them, you can get a “hint” of flavor in areas where garlic can sometimes overpower other flavors. 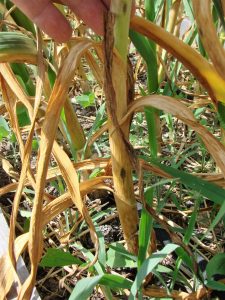 While researching scapes, I found that there are actually many uses of the scapes.  From soups to salads to vegetable.  They can be grilled, sautéed or stir fried like asparagus ending up with a mellow, sweet flavor.  They can also be added to pesto, mixed into hummus, blended into butter, added to mashed potatoes, chopped into a salad and more.  What a wonderful variety and great things to try next year.

I noticed late last week that the tops were turning brown.  I check the soil and, although not soggy, it appeared to be plenty moist.  Afraid, there was something wrong….remember, I had never raised garlic before…I shot this picture and contacted Shannon to see what was up.  She explained that each “leaf” on the top is a layer covering the garlic on the bottom.  The bottom most “leaf” is the outer layer, the next one up is the second protective layer, etc. 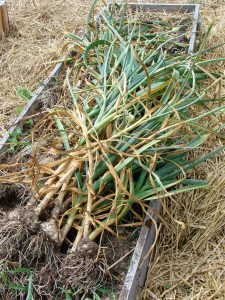 She said she harvests when she sees 2-3 brown “leaves” on the tops.  This leaves plenty of protection of the bulb.  I double checked and almost every plant had 2-4 brown “leaves” so I set out to pull and bundle them to complete the drying process.

I pulled them up, with all but 2 coming out of the ground cleanly and whole.  There were two that the tops snapped off, and I had to dig them out, but they were good firm bulbs with nice cloves.  I will be using those first.  🙂

I laid them out in the bed and carried them by the armloads to an area where I could tie them together to hang to dry.  I used some cotton crochet thread to tie them up into bundles of 6 and trimmed the excess tops.  These will be left hanging, with air circulating around them, out of direct sunlight until the tops have turned completely brown.  At that point the moisture content should be low enough to prevent spoilage and allow them to be kept over the winter.  Each bulb has 6-8 cloves, each of which will produce another plant if planted this fall, so I will choose 9-10 bulbs to use for seed and enjoy the rest in my cooking throughout the year.  I will also be dehydrating and grinding some, which will give me home-grown garlic powder for seasonings and when added to salt, we will have our own garlic salt mix.  I will know that there are no pesticides or other chemicals applied to taint our food.  This is a great feeling. 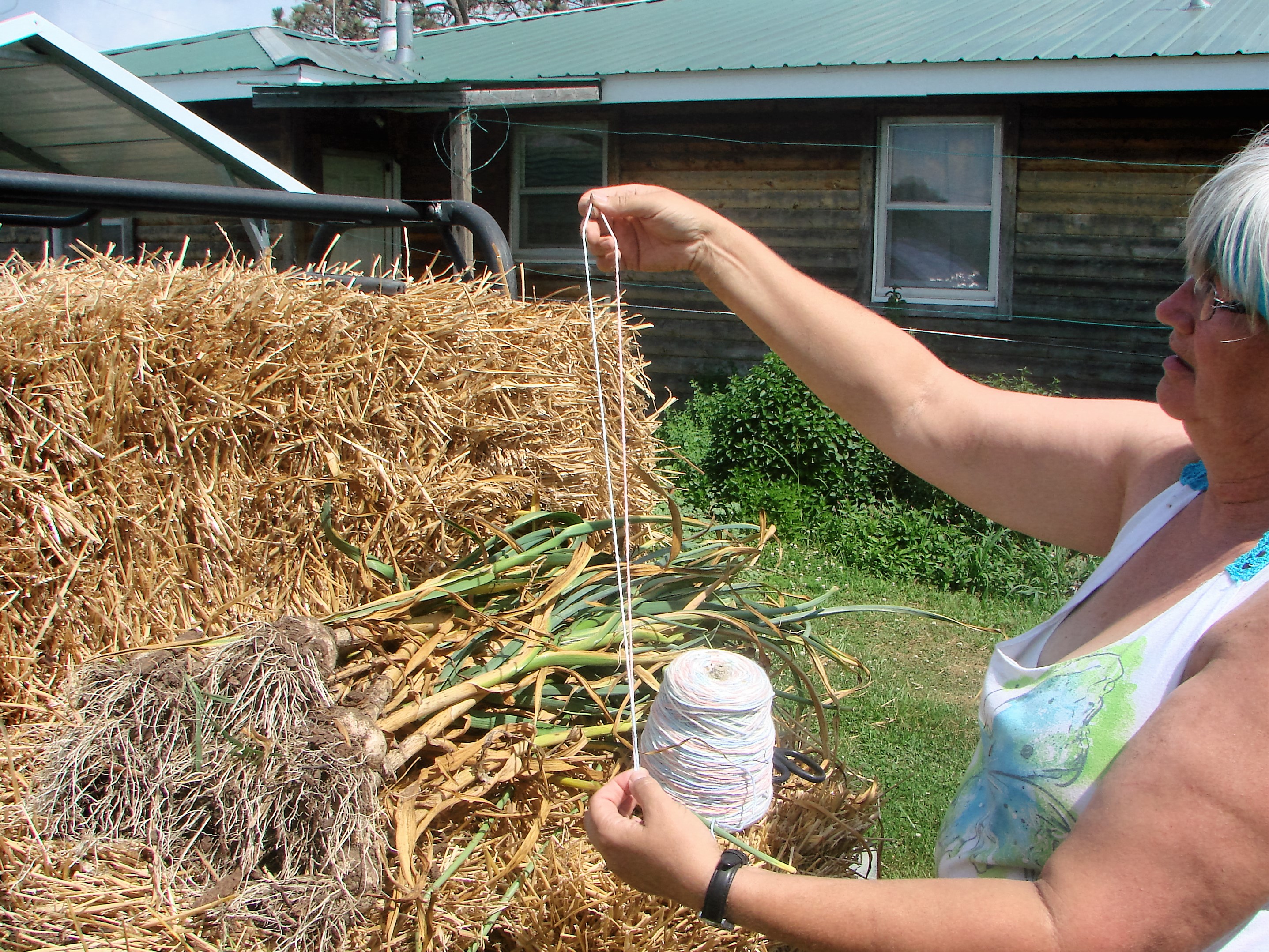 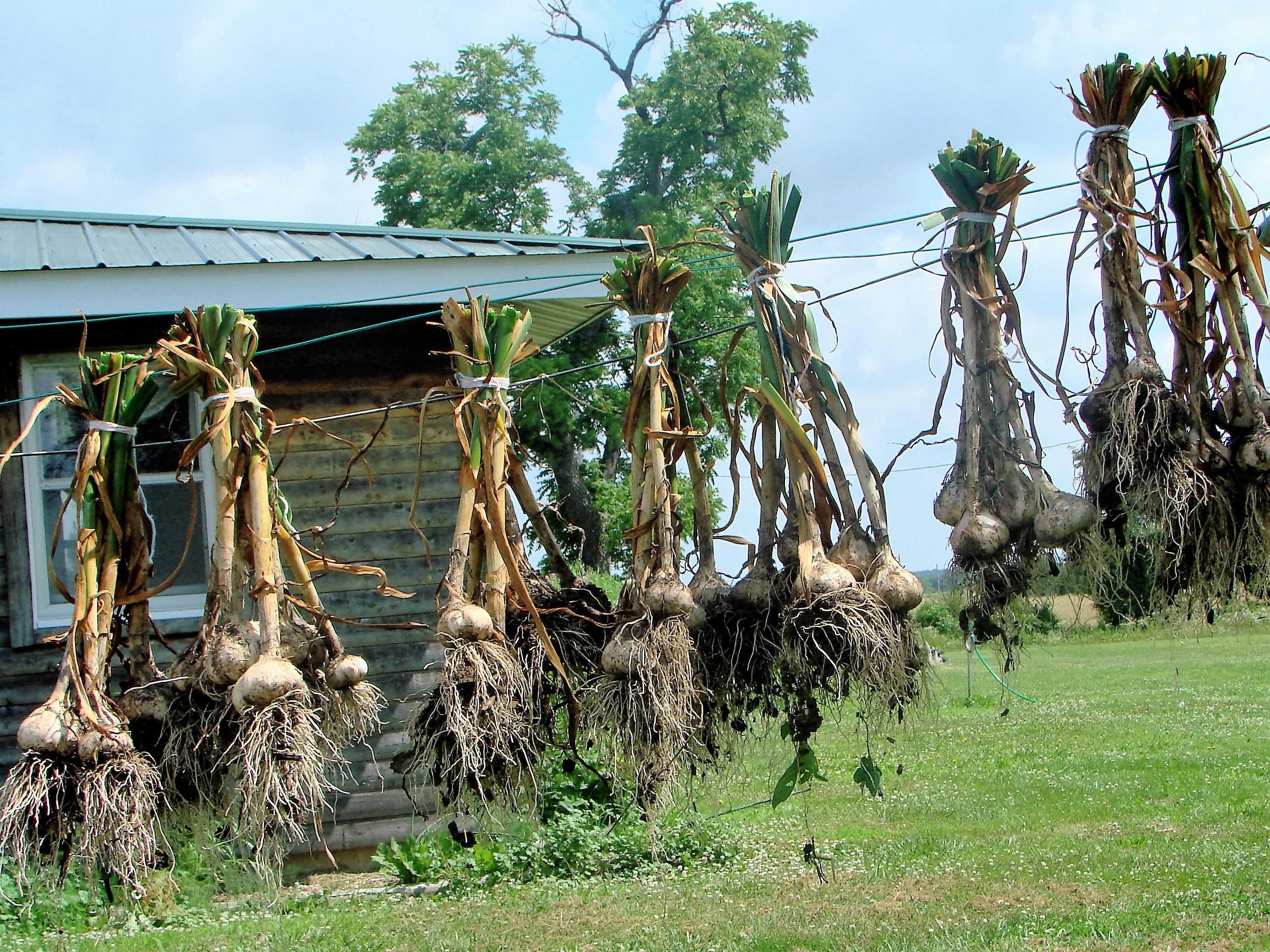 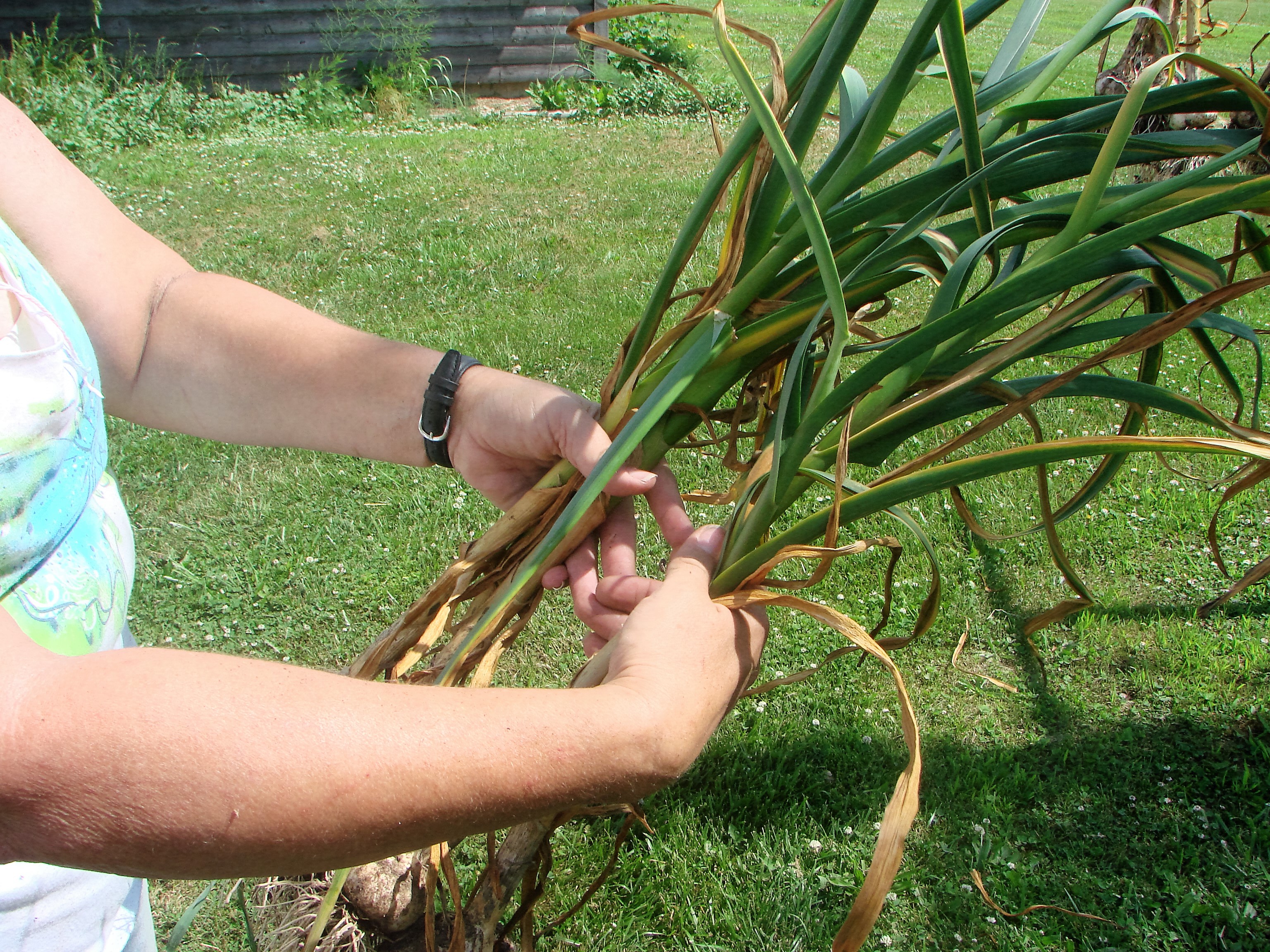 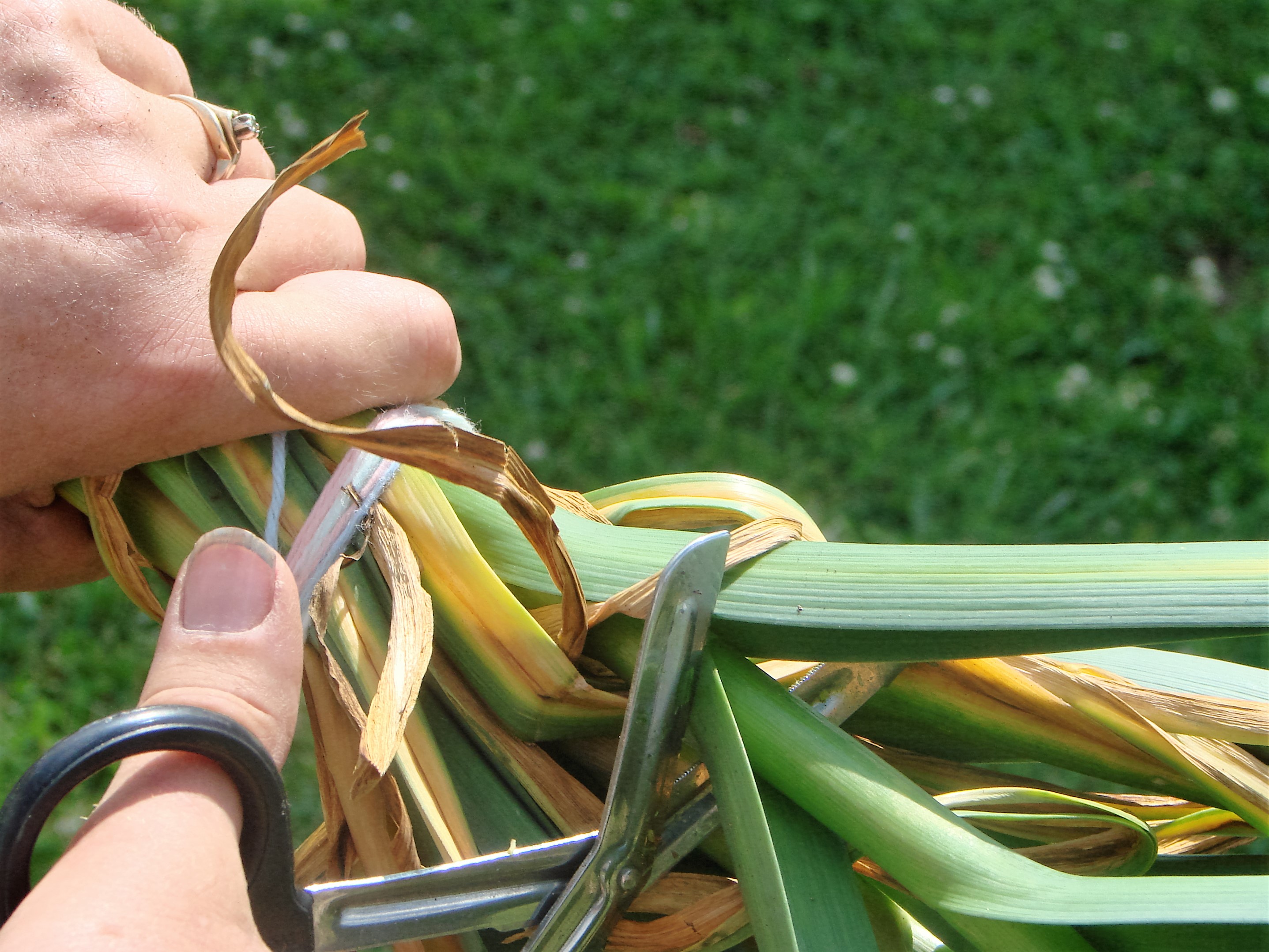 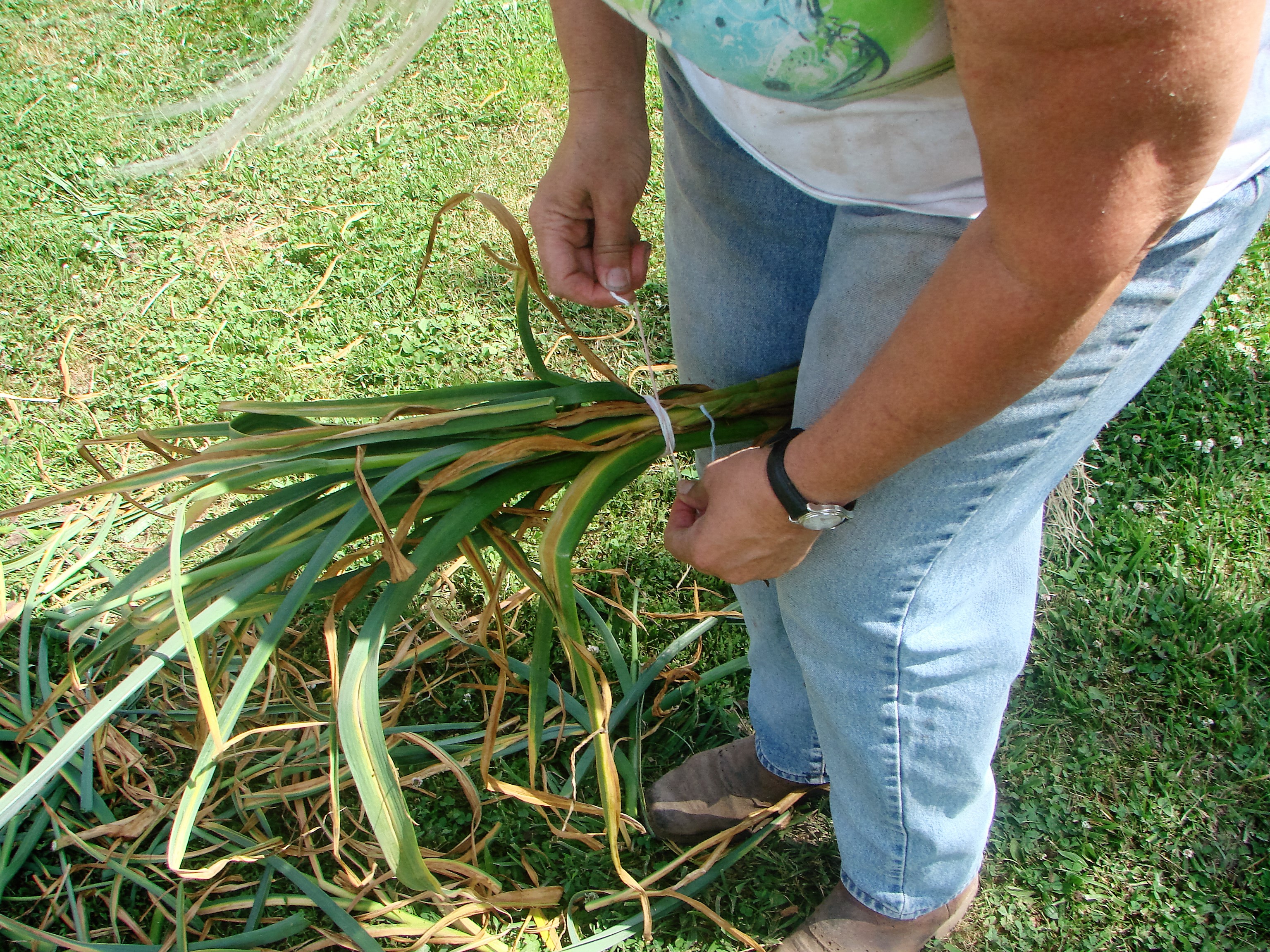 If you get the opportunity to plant some garlic in your garden, I highly recommend you give it a try.  Remember to plant in the fall, watch for the scapes to shoot up in mid summer.  Then watch the leaves during mid summer as they turn brown 2-3 weeks later.  Harvest when 2-4 leaves are brown and dry completely.  Enjoy your home grown garlic all winter long! 😀